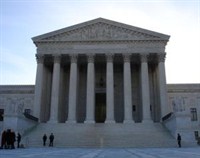 The Supreme Court today reaffirmed a 1964 ruling that a patent owner cannot charge royalties for the use of his invention after its patent term has expired. Kimble et al. v. Marvel Enterprises Inc. involved a dispute between Marvel Enterprises, Inc. and an inventor of a Spider-Man toy. As part of the negotiated license agreement, Marvel agreed to pay a 3% royalty on all future sales. Because of this, the inventor would receive royalties after expiration of the patent term, but the Court determined this effectively extended the term of the patent, running counter to previous cases by the Supreme Court and so the Court struck the royalty term.