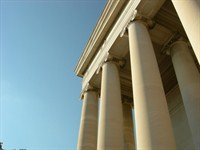 Bipartisan legislation introduced in the House and Senate would allow companies to bring trade secret theft cases in federal court. The Defend Trade Secrets Act would create a uniform standard for trade secrets and allow federal courts to grant injunctions "to preserve evidence, prevent disclosure, and account for the economic harm to American companies whose trade secrets are stolen," according to a fact sheet accompanying the bills. The legislation is modeled on the Uniform Trade Secrets Act adopted by many states.