The Passaic Affordable Housing Coalition, a Porzio client, in conjunction with the Housing Authority of the City of Passaic, announced plans to rehabilitate three senior citizen apartment complexes, an ambitious project totaling $17 million in private public funding. According to the New Jersey Home Mortgage and Finance Agency, the project will generate about $27.2 million in economic output.

The project is possible through the US Department of Housing and Urban Development Rental Assistance Demonstration Pilot Program ("RAD"), which allows public housing agencies to convert their current public housing stock to long-term Section 8 contracts, leveraging debt and equity to address immediate capital needs while preserving affordable housing. This RAD project is one of the very first in the State of New Jersey and the largest to date in New Jersey.

Public private partnerships such as this are likely to become more common nationwide, as a 2010 U.S. Department of Housing and Urban Development assessment valued the backlog of federal funding for public housing at over $25.6 billion, and rising at a rate of $3.4 billion per year.

To read the NorthJersey.com coverage of the project, please click here. 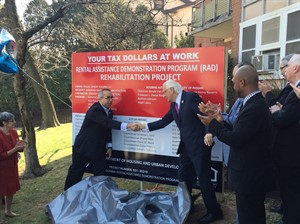