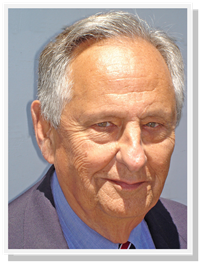 With much sadness, Porzio, Bromberg & Newman announces Myron J. “Mike“ Bromberg passed away on April 30, 2016 at the age of 81.  He was one of our three founding principals and served as our managing principal for 28 years, guiding us from a five lawyer general practice firm to one of the most highly regarded law firms in the state.  Mike was one of New Jersey’s leading trial lawyers of the last fifty years.

Mike was born and raised in Passaic, New Jersey.  He was a graduate of Phillips Andover Academy, Yale University and Columbia University School of Law.  Upon graduation from Columbia in 1960, Mike joined the practice of Ralph Porzio.  Two years later, they recruited John M. Newman to form what would become Porzio, Bromberg & Newman.

Mike's forte was trial law.  He was acclaimed as one of the premier trial lawyers in the state, first defending doctors in medical malpractice cases and then pharmaceutical companies in drug products liability cases.  He later became national counsel for one of the world's largest mining companies in defense of their national asbestos litigation.  Mike was involved in several major cases before the New Jersey Supreme Court, as well as before the 3rd, 8th and 11th U.S. Circuit Courts of Appeals.

Mike was elected to the prestigious American Law Institute and was part of the Consultative Group on Torts: Products Liability, Restatement of the Law, Third.  He served as a regular lecturer for the New Jersey Institute of Continuing Legal Education and its New York counterpart, the Practicing Law Institute.

He also was an active alumnus of Columbia, Yale and Phillips Andover.  Mike cherished the opportunity to mentor  young lawyers, particularly those in his firm.  Many of the principals of Porzio, Bromberg & Newman began their careers as summer associates or first year associates at the firm.  Mike worked closely to hone their skills and was extraordinarily proud when they later became principals of the firm.

Our deepest condolences go out to his family.  We will always honor Mike's memory and his contributions to our firm and the legal community.

A Célébration de la vie will take place on Tuesday, May 10 at Porzio, Bromberg & Newman, 100 Southgate Parkway, Morristown, NJ.  Family, friends, colleagues and clients are welcome from  4:30 pm to 7:30 pm, with remembrances starting at 5:30 pm.  If you have questions relating to the Célébration, please direct your inquiry to Carole Mecca at 973-889-4274 or ctmecca@pbnlaw.com.  In lieu of flowers, donations to The Michael J. Fox Foundation for Parkinson's Research may be made at michaeljfox.org or mailed to The Michael J. Fox Foundation, P.O. Box 5014, Hagerstown, MD 21741-5014 or to The Palliative Care Team at Morristown Medical Center, 100 Madison Avenue, Morristown, NJ 07960.