Effective Saturday, April 8, 2017, William (Bill) J. Hughes, Jr. has joined the law firm of Porzio, Bromberg & Newman, P.C. (Porzio) as a Principal. Coincidentally, on his first day on the job at Porzio, Mr. Hughes will be attending the swearing in of his high school friend, Judge Neil Gorsuch, as an Associate Justice of the United States Supreme Court.

“Today I am excited to be a part of two transitions,” said Mr. Hughes. “Not only am I honored to witness my good friend Neil Gorsuch become a member of our nation’s highest court, but I am also thrilled to be joining the preeminent Porzio, Bromberg & Newman law firm. Renowned for being a leader in litigation, Porzio prides itself on exceptional service to its clients, and provides nothing less. I look forward to joining my new colleagues and expanding Porzio’s brand into South Jersey.”

“When taking on the role of Porzio’s Managing Principal last month, my first goal was to bring new and seasoned talent to our team. With Bill joining Porzio, I know we are acquiring one of New Jersey’s best attorneys,” said Vito A. Gagliardi, Jr., Porzio’s Managing Principal. “Bill has a diverse practice focused on federal white collar investigations, criminal defense, and complex commercial litigation in the areas of cybersecurity, antitrust, fraud, and shareholder disputes. In addition to his impressive professional experience, Bill brings with him an incredible network and provides a formidable entry into the South Jersey legal community. For many years, Porzio has been looking to add a white-collar criminal practice, and Bill brings us that and more.”

Mr. Hughes most recently served as a partner at Cooper Levenson in their Atlantic City office. He is the first attorney to ever be awarded a restraining order against a federal agency. In October, a judge ordered federal agents from the National Oceanic and Atmospheric Administration (NOAA) to cease contact with two government’s confidential informants, who say they were threatened by federal agents with losing their rare horseshoe crab harvesting permit if they did not cooperate with the government’s investigation. Mr. Hughes was defending a Lower Township tuna fisherman.

Mr. Hughes also has experience as an Assistant U.S. Attorney in Camden, where he prosecuted cases from tax and white-collar fraud to international drug smuggling. Mr. Hughes’s resume includes a stint as a trial attorney with the U.S. Department of Justice, Antitrust Division working on high-profile cases such as United States v. Microsoft, U.S. v. NASDAQ Market Makers, and U.S. v. Moody's Rating Services. Mr. Hughes clerked for the Honorable John F. Gerry, Chief Judge for the District Court of New Jersey and Chairman of the Executive Committee for the United States Judicial Conference. In 2014, Mr. Hughes ran for Congress in NJ-2, a seat previously held by his father.

Mr. Hughes holds a LL.M. in Taxation from Georgetown University Law Center and a J.D. from Rutgers University Law School – Camden, a M.A. from the Eagleton Institute of Politics and Public Policy at Rutgers University, and a B.A. from Franklin & Marshall College. He is a member of the New Jersey, Pennsylvania and Washington, DC bars. Hughes is a resident of Northfield, New Jersey. 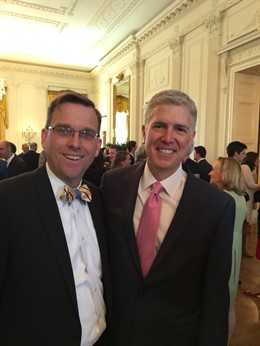