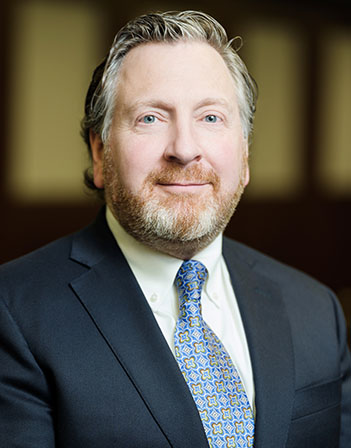 Those who have worked with John Mairo, chair of the firm's Commercial practice group and co-chair of the firm’s Bankruptcy and Financial Restructuring department, seek him and his colleagues out. The reason is simple: They not only rely on John’s leadership qualities and ability to achieve impressive results, but also enjoy his amenable, responsive and thoughtful style. By nature an analytical, curious and strategic thinker, John encourages his clients to determine the desired result early on in a case. The fact that John is such a first-rate listener enables him to help clients and colleagues articulate their goals and map out a coherent, proactive plan to achieve them. This is particularly crucial in his field, where matters are often complex and full of gray areas.

John concentrates his practice in the areas of commercial litigation, workouts, financial reorganizations and creditors’ rights. He is admitted to practice in New Jersey and New York courts. He is certified in Business Bankruptcy Law by the American Board Of Certification. In addition, John successfully completed the INSOL Global Insolvency Practice Course and is recognized as an INSOL International Fellow.

The varied nature of John’s experience stands out and adds immediate and comprehensive value for his clients. He has worked on billion-dollar cases with international implications, as well as mid-size and smaller matters. John has represented creditors’ committees, secured creditors, administrative agents for syndicates of lenders, debtors, foreign representatives (including Chapter 15 cases), landlords, equipment suppliers and other interests. He also has extensive experience in litigating preference and fraudulent conveyance actions. Consequently, he understands and appreciates the perspectives and agendas of the various constituents in a matter and is thus able to expedite resolution.

Not long ago, John’s ability to listen and then take action led to a rewarding result in a case in which he represented the Committee of Unsecured Creditors in a jointly administered case involving multiple related debtors. The debtors were threatening to pay a low distribution to the creditors of certain debtors while paying a much higher distribution to the unsecured creditors of other debtors. John prepared for a litigation battle to have the collective debtors' assets pooled and to require a 100% distribution to all the unsecured creditors. While a litigation battle was ultimately unnecessary, John successfully used his knowledge of the governing bankruptcy precepts and command of the relevant facts to convince the debtors to propose a Chapter 11 plan that provided for a 100% recovery for all the debtors' unsecured creditors.

If a litigation battle is necessary, John will be prepared and make sound decisions leading to trial and during the trial to benefit his clients. For example,  John served as special counsel to a trustee in pursuing litigation against a bank and insiders of the debtor company. While attempts were made to consolidate the trials, which would have led to significant delay, John was able to keep the actions separate and led a multi-day trial in the bank action that resulted in a victory for the client of over $1.1 million. Separately, John was then able to settle the remaining insider action on favorable terms.

Recently, John represented a client in a "bet the company" antitrust multi-district litigation involving multiple class actions and opt-out litigants. John spearheaded a group of attorneys within his firm to achieve excellent results for the client, which enabled the client to not only survive, but thrive in its business endeavors going forward. This was achieved through: (i) working with the joint defense group, which effectively fought against the plantiffs on common defense issues, and which in turn reduced the client's overall legal spend; (ii) thoroughly understanding the strengths and weaknesses of the client's case; (iii) resolving litigations at opportune times with the various plantiff groups and opt-outs to reach excellent settlement terms; and (iv) skillfully working with insurance carriers to obtain support for funding legal costs and settlements.

John was awarded a certificate by the United States Bankruptcy Court for the District of New Jersey in recognition of and appreciation for his Pro Bono Service. Recently, the U.S. Bankruptcy Court in New Jersey appointed John to its roster of mediators.

Outside the firm, John, who is a former high school and college soccer player, enjoys cheering for his children’s teams.